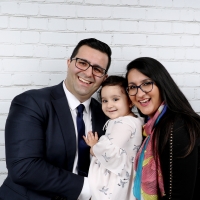 Buying your first home with a growing famiy

My wife Bahar and I know all about making the big jump from living in a condominium, just the two of us, to buying our first home and moving residences as we welcomed our first child.

There were a lot of things to consider, whether we wanted to continue living in a condominium and have all of the comforts of condominium living (not having to plough the snow, not needing to maintain a lawn, having the various amenities of a condominium) versus buying and living in a home and enjoying all the perks that come with homeownership (more space, summer barbecues, having our own garden etc.), while having a lot more responsibilities.

After crunching the numbers, and realizing that we needed more space as we were expecting our first child, we decided to take the leap and purchase our first home. We began looking at properties in Richmond Hill, Aurora, Newmarket, Kleinburg, Stouffville and Markham and began comparing what each city had to offer and also what kinds of homes we could afford in our price range. We looked at new builds and established communities and in the end, it made the most sense for us to buy a new build in Newmarket. We signed the paperwork for our house on Valentines Day, February 14, 2017 and our new home was to be ready for September 2017.

After signing the paperwork for the new build, we thoroughly cleaned, decluttered and staged our condominium and listed it on the market that same month in February 2017. That first day we listed our condominium, it had 6 viewings and we had an offer before the end of the day and it was above asking price! We were beaming with happiness! We closed the deal and then the fun (work) began.

There was going to be a 5 month period from our condominium closing to the time that we were supposed to close our house. We decided to look for an apartment to rent for those 5 months. We found a spot in Markham and in April 2017, we moved into our temporary apartment, while my wife was 8 months pregnant.  Some of our belongings we had to store in the homes of our parents as we did not have the space in our temporary home. The next month, in May 2017, we welcomed our little girl into this world! Our life was forever changed. We were and continue to be in love with our little one, Jana. And of course, the sleeplessness began in our lives. Fast forward 5 months later, we anxiously awaited to see if our closing date would proceed as planned. We knew that we could face some delays in closing and that did happen. The closing date was moved back by 1 month. Although this was not the best news, we were happy that the delay was not a substantial one which happens quite often with new builds. Now Jana was 5 months old and we packed for a 2nd time and moved to my in-laws home where we lived for a month. In October 2017, we finally moved (for a third time) into our new home and began the unpacking and settling in process.

My wife and I know very well what it means to move and to make big decisions with regards to buying and selling in the midst of major life transitions and changes. While we had some very challenging moments throughout the process, in the end, we were able to move into our very first home and build our lives together with our growing family. We wouldn’t change it for the world!